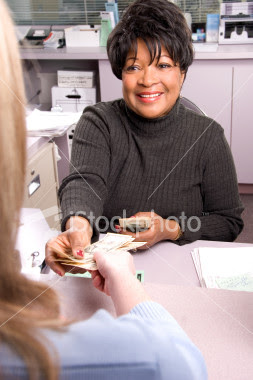 What is there to do about the general level of customer service in the ? Poor service on a daily basis has the effect of making life so much harder than it needs to be, in the form of late deliveries, don’t-care attitudes, hostile glares and rougher than expected tones of voice.

While we may talk and talk about the historical roots of low service levels, this kind of talk seems to do nothing except leave us resigned to a past that cannot be changed and a future limited by what we have inherited through centuries of servitude.

In other words, we are talking ourselves into thinking that things can never change.

On the other hand, it seems that our better tourist hotels, have found a way to provide service that is superior. For the purposes of this blog, however, I’d like to focus strictly on the service that we Caribbean people provide each other in our respective countries, rather than to outsiders or visitors.

I recently had the opportunity to visit a couple of banks in the region, in my vain attempt to open an account on a single visit. It was a vain attempt, and while the CSRs in the banks I visited were not rude, they made it clear that “they didn’t allow just anyone to open an account.” While they were not considering me to be a part of “anyone,” (probably due to my accent, questions and diction) they used that line to explain why there were so many hoops to jump through to open a new account. Also, at the end of the conversation, the polite CSRs (who felt more like gatekeepers), did not write down or otherwise record my name or contact information, even though I made it clear that I was looking for a new home for both corporate and personal accounts.

As a consultant, I’ve been part of many brainstorming sessions, in which executives wondered to each other: “Why don’t we have a greater share of customer’s deposit accounts?” and “What can we do to open more accounts and attract more funds?” Little do they know that their front-line staff is doing its best to discourage the general population from opening new accounts, under the guise of presenting an elite image. The reality is, that they thinking that they are doing the right thing.

This is pretty funny at some level – executives burning the oil to try to figure out why their strategies to increase deposits aren’t working. The CSRs who I met with would be quite taken aback to be told that they were hard at work, taking actions to further a strategy that was directly opposed to the one that their senior managers were trying to fulfill.

The obvious question that you, the reader, are asking (and I’m guessing that you are probably a professional who has worked in the ) is why in the world would I try to open an account in that manner? Everyone knows that getting things done in the region is a matter of who you know, and who knows you. Why in the world did I not use my contacts to set up a meeting with the branch manager, who would show me the kind of service that I have become used to routinely receiving in ?

Well, I do know better, but for the purposes of the project I was working on, I deliberately dressed in street clothes and did not use my contacts so that I could experience some of what the average person experiences. I also did not drop names, pull rank, ask to see the manager or any of the other things that we do in the region to distinguish ourselves as professionals from the “whole a di res’ ah dem.”

The truth is, there are at least three kinds of service in the . Tourist Service, Friend Service and “Di Res Ah Dem” Service.

Tourist Service is self-explanatory. Friend Service is the kind that you extend to someone you either know, or want to know or are afraid might know you or even worse, might know someone important that you know. “Di Res Ah Dem” Service is the service given to the majority of people that you don’t know and will never see again, have no power and have no connection to you.

It’s funny to see how this works and to explore the variations on the theme.

Recently a friend of mine lost her passport. The first step was to fill out a police report, which we were assured would take at least 10 working days. After the police report was filed, it would take another 7 days to get the passport replaced. This was turning out to be a real problem, as her flight to return to the was only 7 days hence.

At first, the policemen and women were polite, but slightly dismissive. The low point came when we returned to the airport to be told by a policewoman in an entirely dismissive tone that “no-one had turned one in” as she gave us a blank look, apparently annoyed that we were interrupting her job standing-at-the-counter-doing-nothing.

Well, a day or so later we got a call from one of the policemen behind the counter (the one who had taken the statement a few days before.) He was actually calling to apologize for his colleague’s dismissive behaviour, and for the fact that he could not talk to us himself. I was amazed.

He went on to ask me if I went to Wolmer’s Boys as a high school student. I answered, “Yes,” and he asked me if I remembered him. He was a year behind me, and we then spent the next fifteen minutes catching up, even though I was driving through the hills of at this point with a poor cellular connection. I hadn’t recognized him, to tell the truth (grey hairs and extra pounds have a way of warping one’s memory), but he was also calling to tell us that the report was finished and that we could pick it when we returned to . All in all, the entire process of getting the police report took less than 48 hours.

Not so amazing after all. I didn’t realize it, but he was giving Friend Service when I had been expecting “De Res Ah Dem” Service.

The same thing happened when I was dealing with another service provider, who I was referred to by a friend. He spent the first thirty minutes or so “qualifying me” which in the means finding-out-who-we-know-in-common, an absolutely critical activity to perform before starting to do business of any kind. Once I was qualified by at least 5 points of common acquaintances, then his entire manner changed and only then could we start to really do business.

Having said all that, I’ve spent the last few weeks in US wondering what it would take to create an entirely new class of service for the majority of our people.

It strikes me when I see my new wife struggle with service levels (we’ve been to and together) that the only difference between the two of us is that she has higher expectations. As a customer in the Caribbean, I’m just glad that there is someone there in person (not on strike, doing personal errands, late because of the bus, the heat, thieves, rain, oversleeping, talking on their cell phone, etc.) She, however, expects that the service will be at the standard of the average North American retail establishment.

I was in a Staples store in this past weekend and happened to observe a cashier as I was approaching the check-out register. She had a bottle of Windex in one hand, and a rag in the other, and was carefully wiping down and shining her station as if it were her first, brand new car that had just gotten muddy. Where did she learn to do that? She was no older than 22, yet there she was, cleaning up her station when no-one was around to see her do it.

Was it a line in her customer service manual? Was she trained in how to clean her space? How could it come so naturally to her? Was she a born high-achiever? (I doubt it, given what I know Staples pays its entry-level workers.) Was she used to hard-work whereas our people are not used to working hard (demonstrably false.)

I don’t know the answer but a couple of things struck me that I’m still thinking about.

One is that the average Caribbean CSR in the average store has never stayed at Sandals, SuperClubs or the Hilton. They have never seen or experienced Tourist Service, let alone the standard of service expected in . Instead, they are used to the customer service levels they have received at the roti shop, the patty shop and the burger joint (i.e. extremely poor levels of service.) In other words, they do not have and have never had a positive role model for the kind of service that makes customers want to return to buy the product just because the service is so good. Occasionally, they have experienced Personal Service, but that really doesn’t count (partly due to the inherent, reciprocal nature of that kind of service.)

The second thought is that we don’t even begin to teach customer service in schools to our students as a subject, even though a great many of them (I would argue that this is true of ALL adults) will at some point be working in a job or position in which the customer-supplier model will be critical for them to know and employ.

I can’t recall the last time I used geometry or algebra. Yet, something as basic as customer service, upon which business in ALL the tourist-oriented economies of the depends heavily, is not even mentioned as a subject.

I could imagine in-depth training in the theory and practice of excellent customer service, including practical tests, written and oral tests as well as research projects. Students would be required to experience good as well as bad service, and to develop for themselves a way of relating to people in a customer-supplier interaction that works to the benefit of both parties. In our heavily service-driven economy, this could open whole new areas of opportunity for local business, and do wonders for out tourist product.

This alone would do wonders for our regional economies, and remove some of the unnecessary hardship that comes from going about doing our daily business. We actually do care about each other deeply, but it’s about time we showed it on a regular basis.

It’s no accident that there have been so many times when I’ve been a customer, and yet I’ve ended up feeling like either a bad student, or a recalcitrant child. In the absence of role models, and in the absence of early training, I have a theory that a CSR goes to their past experience as a student and as a child, and tries to use that experience to deal with “De Res Ah Dem.”