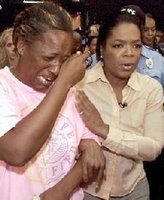 It used to be that the advice given to a new manager to “be positive” was good advice.

In fact, there was a time when movies used to be all about good things, and rarely attempted to get into the nitty-gritty underside of everyday life.

However, times have changed, and someone who attempts to “focus on the positive” is regarded with a well-earned sense of suspicion. This suspicion deepens, and eventually hardens into cynicism when times get difficult. Why is this?

Well, when the chips are down people who try to focus on the positive exclusively, eventually come to be seen as dangerous, because they tend to ignore reality in their attempt to be upbeat. And today’s followers, whether it be in politics, corporations or sports are more tuned in than ever into the nitty-gritty reality of life.

Blame television, the movies, video games, the news media… whatever. I prefer to think that there is an unwillingness to overlook the raw unvarnished truth, and that that is a sign of maturity and growing consciousness that I can see at work here in the Caribbean.

The message that is hard to swallow here is that the truth that people hunger to hear the most from leaders is not how a situation is a mess (although that may be true). Instead, they want to hear from the leader where they realize that they have contributed to the mess themselves, and have now had some kind of insight from which they can glean some hope.

This degree of authenticity is fast becoming the new currency of leadership.

Some are seemingly rich in it — Oprah’s apology after defending the author James Frey’s lies comes to mind.

Others are poor — George Bush’s inability to be able to remember any mistakes he has made on several public occasions comes to mind. PJ Patterson’s insistence on “solid achievements” in areas of minor interest, and inability to take responsibility for failures also comes to mind.

The psychologist Carl Jung said “Everyone carries a shadow and the less it is embodied in the individual’s conscious life the blacker and denser it is. At all counts, it forms unconscious snag, thwarting our most well-meant intentions.”

I would add to that and say that the harder a public figure tries to look good, the worse they look. Why? The tactic that most use is to try to find ways emphasize their good sides and play down their bad (i.e. shadow).

However, a leader that plays down his bad size as bluntly as Bush and PJ do only seem to drive up the suspicion of those listening that they are either

As we enter 2006, and as people increasingly insist on “Keeping it Real” this style of leadership is sounding more and more hollow.