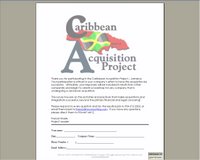 As promised in a prior entry, I’ll be building up the paper I’m writing through the more informal mechanism of blogging.

The first surprise is that the data is much richer than I remember. It’s been three years since I last went through the 5000+ data points that were collected in the surveys, and while the findings can’t said to be statistically significant, they are infinitely better than working with just a gut feel.

One of the findings that I’ve discovered confirms a suspicion of mine, which is that we Caribbean business-people live under a peculiar misconception that our territory or country is worse than others.

The survey showed that in response to the statement: Jamaicans as a people are more difficult to deal with (than people in the respondent’s home country), there was a 33 point difference in the responses. Outsiders felt that Jamaicans were just about average, scoring only 45 points on a scale of 1 to 100, with 100 being “Definitely Agree” and 0 being “Disagree.”

On the other hand, Jamaicans scored the response at 66 points.

The same trend continued in response to other questions:

In each case, the Jamaican response (from executives) was markedly more pessimistic. Without having any empirical evidence, but having the experience of extensive work in each of the three countries involved (Trinidad, Jamaica and Barbados) I would say that a given set of executives from any country (without significant first-hand foreign work experience) would respond the same way.

In other words, the point differences indicate that this is a matter of self-esteem for the executives concerned. I imagine that this matter is only resolved when there is some direct evidence with which to compare one’s home country.

One of the frequent conversations I hear here in Jamaica, is one of frustration, in which a particular situation is blamed on some local or cultural failure. Often, from my point of view, it is nothing of the sort.

Often, there are numerous examples to which I have had first-hand exposure that show that the situation is not a local one, but is one that is either global or common to all developing countries.

For example, some Jamaicans talk about the traffic in Jamaica as if it is the worst on the planet. Here in CARICOM, however, Trinidadian traffic gets so bad at times that patrons are unable to attend a fete that ends at 4:30am because the traffic is congested enough to render the ticket useless (it happened this past weekend yet again).

Some would counter by arguing that the Jamaican driver is among the worst.

While I can’t prove this, I have been driven hundreds of times through the streets of Caracas, and can testify that I would never drive there, for fear of my dear life being lost in the mayhem I witnessed. I imagine that Caracas is only one of many cities of its ilk, and the streets of Kingston offer no comparison.

I can only think that the Caribbean Single Market (CSM) will help to resolve some of the ignorance that comes from a lack of “working exposure” (as opposed to “vacation exposure” from which little can be learned).

Perhaps the issues of self-esteem will go away when with an increase in commerce comes an understanding that much of what we experience in the CSM has less to do with territorial shortcomings, and more to do with historical forces, most of which are related to how our countries were under-developed by Britain.