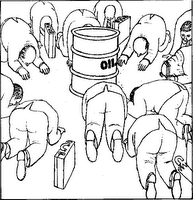 What if all of a sudden Jamaica were to strike it rich, like we discovered a source oil, natural gas, gold or diamonds?

Evidence suggests that that could be one of the worse things we could wish upon ourselves.

Trinidad is currently undergoing an oil and natural gas boom that is fast becoming a source of concern to some of its citizens.

Recent past history tells us that developing countries that “discover” a single source of a new mineral commodity end up wrecking their economies. Oil and natural gas are the most recent instigators, but gold, diamonds and other precious ores have also played their part.

How does this happen?

Well, believe it or not, it could be compared to hitting the lottery, which often involves

I have never won anything in my life, but I once met someone whose lottery-winning uncle refused to fund her continuing education once she decided to switch from Pre-Med… causing her to drop out in mid-semester.

The problem with a windfall is that it distorts things. Undeserved and unearned resources are placed in our hands. We have an instant material power that is unmatched with equal wisdom. Our capacity to live life productively remains unchanged, but Lady Luck has granted us the fruits of a windfall and fate demands that we deal with them nonetheless.

The new NBC series “Windfall” offers an interesting and dramatic account of one group of lottery winners.

Trinidad’s current windfall is actually its second, and the last one was bad enough and recent enough to have those with long memories nervous. Some of the effects of $75+ per barrel oil are already plain to see.

Could we expect the same things in Jamaica if we were to make the same kind of discovery?

Countries such as Nigeria and Venezuela have clearly suffered historically from their windfalls, leading some to say that the discovery of oil is the worst blessing that a country could pray for.

The remedy seems to lie in a commitment by government to the long term development of its people, increasing education and its sister, productive capacity, faster than expectations of instant wealth.