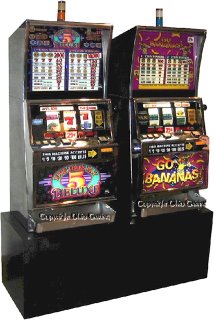 Today, in a taxi to the airport, I heard the worst advertisement ever.

RBTT Bank’s newest promotion involves the following promise – spend over US$1000 before Dec 31st, and be automatically entered to win a chance to have the entire balance paid off in January. In short, the bank is encouraging its customers to make over a thousand dollars in new purchases, in order to qualify to win the promotion.

My problem with it?

It just all seems to be encouraging gambling – paying cash in order to have a random chance of winning big.

For some reason, I doubt that RBTT has imagined the full range of outcomes. Let us, on their behalf, perform a thought experiment and imagine what would happen if the promotion is wildly successful.

One person “wins” and ends up with a nice zero balance. Hundreds or perhaps thousands of customers end up with new balances over US$1000. Many of them might well have changed their buying pattern or choices in order to win the promotion. Some will have used credit instead of cash. Others will have decided to make purchases they never intended to make in order to qualify.

All will have new balances of more than US$ 1000 on their RBTT card on Dec 31, and the majority would have them because of the “success” of the new promotion.

RBTT would seem to be a winner, if the promotion succeeds. After all, new balances mean new interest income.

But does RBTT really benefit in the long-term? I cannot imagine that the kind of customer who would change their buying habits in order to take on new card debt to win a lottery is the kind that RBTT wants. After all, a gamble on that filly in the 5th is not the same as a gamble on a new US$2000 card balance. When the 5th race is over, the transaction between the track and the bettor is over.

However, on January 1st, RBTT will have a new long-term relationship with a debtor who is essentially a gambler.

I cannot imagine that this fits the profile of the ideal customer. If I were RBTT, I would immediately “assist” these new debtors to break their addictive habits. Maybe Gambler’s Anonymous? After all, surely RBTT does not want their customer to repeat the behaviour.

If the program is successful, and other banks decide to play copycat, I am sure that RBTT does not want them jumping ship in time to gamble once again.

Instead, RBTT must want the gambling card-holder to settle down, see the error of their ways, and become a faithful and trusted customer who pays the monthly bill like clockwork.

All this, rather than chasing down the next card, dice, scratch, domino or internet game of chance. Hopefully, when this unlikely “transformation” occurs, they will bear no resentment towards the bank for profiting from 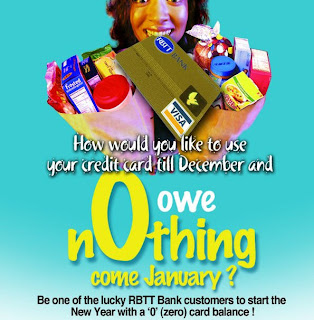 their weakness for the thrill of a win.