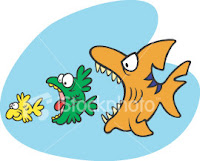 I have been watching the takeover of DB&G by ScotiaBank and wondering what I would do if I were involved at any level.

If I were an employee, I would be concerned.

Although the previous and new owners have promised that there would be only a few changes, human behaviour would predict otherwise. The truth is that in acquisitions, everything changes, and very few things remain the same.

In fact, they MUST change, because that is the very purpose of the activity.

Scotiabank is not taking over DB&G for the fun of owning another institution. Instead, it wants to achieve particular business objectives and sees DB&G as the vehicle to accomplish them.

This is just about THE most fundamental change that can happen in business, as it is only a matter of time before Scotia’s business goals percolate down, affecting every single employee and every single customer. In the case of ScotiaBank and DB&G, Scotia cannot help but affect DB&G’s culture, morale and values. Their relative sizes guarantee an inordinate impact.

I imagine that the employees of DB&G have probably already developed the us vs. them language that I have seen in every M&A I have studied or witnessed.

Experience tells me that the best way to reduce DB&G, the brand to just “db&g,” a small part of a much larger bank, is to deny the reality that massive changes are coming, and to insist that everything is going to be the same. Unfortunately, the message that “things are going to be the same” is quickly followed by its evil twin: “things are fine.”

Most managers of M&A’s stick to these two scripts, even when their employees are telling them over and over again that they are wrong.

The effect of this inauthenticity is a separation between management and employees, and a loss of trust. Managers either lose touch with reality, or their people, and the predictable result is a drop in morale. Like George Bush and Dick Cheney on the Iraq War, they continue to assert that “there have been tremendous successes” and “failure is not an option” in the face of mountains of contrary, public evidence.

Managers find themselves in what they think is a catch-22: they try to “stay focused on the positive,” thinking that they cannot tell themselves and others the truth of what they think and feel, because it would destroy what little morale and trust they have left.

What they don’t appreciate is that employees want the very opposite. If the situation is dire, and bad things are likely to happen, then it is much better for everyone to acknowledge them together, rather than try to deny that they will ever happen. While some sad, fearful and even angry feelings may come out at first, it is more likely to help morale, productivity and the long-term future of the company if the truth were openly acknowledged at each step of the way.

The old DB&G has passed away. To prevent a broken, busted “db&g” from crawling out from the remains, the management of the new entity will need courage to talk about the changes that are likely, and predictable, and even those that are unwanted, and unpredictable.

This kind of courage actually gives employees faith that the leadership is fully in touch with reality.

What becomes possible is that an entirely new company could be created from the old. By freely allowing the old company to pass away (while mourning its death) the space might open up for a new DB&G — Subsidiary of ScotiaBank — to be created.

It is a natural progression of events that only managers can thwart by continuing to insist that what is dead is still, somehow, alive.