I like it when a source like the Harvard Business Review finds some evidence that backs up some hunch I have had. Here are a couple:

When to Let Them Duke It Out

In a white paper I wrote a few years ago entitled “An Executable Strategy for Every Employee” (available by sending email to fwc-exstrategy@aweber.com) I argued that it is important to have executives fight amongst each other in order to come to consensus. We encourage that they do so in our particular approach to strategic planning.

This is the very opposite of dividing up a document into parts and then farming it out to different vice presidents.

In this short article, Tony Simons and Randall Peterson show that

In short, politically driven teams, or those driven by mistrust benefit the most by making consensus decisions.

I witnessed a CEO fired during a strategic planning retreat (to his surprise.) In 18 months, his successor who was at the retreat was also gone.

It was an ugly situation that undermined any trust that might have been possible, and today the company still suffers from the aftermath of that inexplicable decision.

A the very end, the authors deliver a zinger — CEOs that think this doesn’t apply to them might be in trouble, as the vast majority of CEOs in the study “couldn’t accurately describe the level of trust among their team members. It’s as if they were describing a different team and did not realize it.” 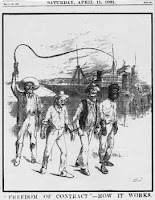 The High Cost of Chinese Labour

Replace the word Chinese with the word Caribbean and all of a sudden, this article makes sense to us in the region.

Low cost labour measured on an hourly basis is an incomplete indicator of total costs.

In fact, the cheaper the labour, the more likely there is to be turnover because a 5 cents per hour difference might be small to someone earning US$10 per hour, but to a Chinese worker earning 75 cents per hour, it represents a big difference.

Here in the region, our workers seem to be quite inefficient, evidenced by the number of human beings sitting idle or moving sluggishly at any fast-food establishment, construction site or manufacturing facility.

Yet, we know that if you take many of those same people and give them visas to live in Toronto, all of a sudden they are able to work many times harder at 2-3 jobs at one time.

It seems that our managers do not understand the total costs of labour, as described in this article, and fail to take into account the costs related to turnover. Whenever a manager says “I can just find someone else,” they are probably ignorant of this cost.

Also, managers fail to see that hiring 10 people is not the same as hiring 5 at double the wage. It might be the same in the narrow sense of dollars and cents paid in payroll, but the principle of the mythical man month is well-known to software developers, but ill-understood outside that industry.

To put it in more concrete terms, the number of ways in which one worker could diss another (resulting in the need for a managerial intervention to prevent a fight or a prolonged cold shoulder) goes up dramatically. Their job becomes radically harder extremely quickly.

By virtue of these socio-psychological economies of scale, it makes sense to hire very carefully, and to consider total costs (measurable or not) rather than just the unit cost of labour.