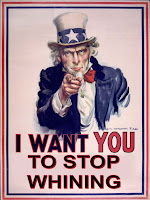 I have always been wary of those exercises in which companies do an opinion survey to try to find out what employees are unhappy about.

Typically, the next step is to create teams to tackle the items of unhappiness, in the hope that by correcting them they will go away, yielding happy employees.

In theory, this seems to make sense. In practice, it never does.

I think it is because we humans will always and forever have thoughts that are unhappy ones, no matter how much material wealth we possess, friends we have or family who love us. It appears that we each possess an invisible and eternal “unhappy thought generator” embedded in our genetic makeup.

Companies that think they can solve the problem of unhappy thoughts with the latest team-building program (or anything else) are fighting a losing battle. shortly after the program is complete and the problem solved, the whining starts again, except that now it is directed at a different target.

A May 2004 article from in the Harvard Business Review’s forethought sections seems to back this up to some degree. The article is called “Whining Away the Hours: Employee’s complaints are often good for morale, particularly when nothing’s done about them.”

The author, John Weeks, argues that employees that get together to whine about innocuous items are actually engaging in a form of community in which sharing what they don’t like actually connects them together.

He distinguishes between “recreational negativity” from “constructive dissent,” and argues that an important skill for executives is to be able to tell the difference between the two. He adds that “there is nothing people enjoy complaining about more than a meddling manager who runs around trying to fix things that no one really wants or expects to be fixed.”

I remember a manager I worked with who claimed to be able to save $50m by simply cleaning up a database… (this in a factory that earned $100m per year.) He took himself quite seriously, which made him the regular butt of office jokes.