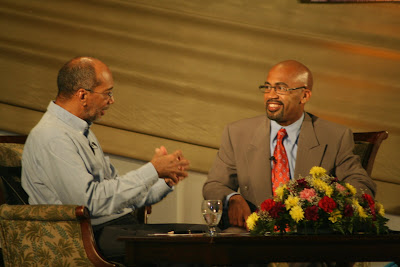 On Friday night, at the just concluded HRMAJ conference, I had the opportunity to interview Douglas Orane — CEO of Grace Kennedy. His company, with almost US$900m in revenues, is Jamaica’s largest private sector company.

That I did so in front of some 200+ participants, with my first experience of make-up, under hot lights and for a live video recording only made it a little nerve-racking.

Once again I had the good fortune to have an expert in my corner. Elaine Wint (see elainewint.com) is an expert in the art of interviewing, and one of the very best professionals in the Caribbean in performing a skill that I now realize is much, much harder than it looks. I learned a lot from the entire experience, but the most important thing I learned is that when people are skillful, they make things look easy.

She also asked me about the goals I had for the interview, and what I wanted to accomplish.

While these might sound like simple questions, I found that the greatest value I got from the evening was in noticing who she was being as she asked the questions. She was incisive, and sharp, yet ensuring that she was not the centre of attention. I could see that the interview was all about him, and not too much about me.

Luckily, I had also gone to her a few weeks ago when I had a television interview to give. This time, I was the subject of the interview.

While her advice then was completely different — it was altogether mind-blowing — it made all the difference in how well it went. The time I spent with her in each instance was short, but her professionalism and broadcast experience, plus her ability to coach are gifts that are not combined effectively very often.

Thankfully, Douglas Orane was not only talkative, but insightful, and he said quite a few things that were simply enthralling. I was relieved, to be frank, that he made my job such an easy one, and I was sorry to have to bring the 60 minutes we spent together to a close.

I don’t know if I’ll ever be in the same position again (to be on the other side of the microphone,) but I now have an idea of how much I can improve what I do in this arena with the help of an expert like Elaine.