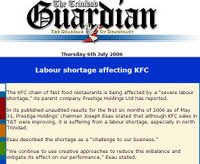 The Trinidad Guardian is reporting a phenomena that I mentioned earlier this year that to us here in Jamaica is astounding: Trinidad is nearing full employment.

The evidence being presented is that outlets like KFC are having a hard time finding sufficient labour to staff their restaurants, and at least one owner of another fast-food outlet echoed the same sentiment to me recently.

This will be a real test for CSME, which is specifically intended to correct imbalances like these.

Guyana and Jamaica have tremendous unemployment problems, yet Trinidad only competing with Barbados in the minds of people across the region, for the title of the most difficult place to which one can legally migrate. Just the other day, an acquaintance of mine had to return to Jamaica after encountering work permit difficulties after several months of living in Trinidad.

Unfortunately, the CSME legislation was only very recently expanded to include nurses and teachers. It looks like it will be some time before casual workers are included, if ever. So fast-food outlets in Trinidad will continue to have the problems they are having, and it is likely to only get much worse before it gets any better.