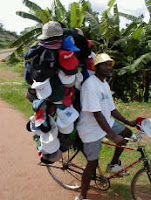 Here in the region, we delight in finding a “likkle man” who can do something at a fraction of the cost of a much bigger player, at the same perceived level of quality.

Empowering the likkle man is an everyday form of rebellion, perhaps going back to plantation days when holding back business from Massa was an imperative. Giving it to the likkle man kept the business in the community.

However, giving business to the small man is only the beginning, and unfortunately, we in the Caribbean are very weak in helping the likkle men around us to turn into big men. We don’t challenge them to achieve high standards.

That is not to say that they are not able to produce samples of high quality. In Jamaica in particular, we have hundreds of artisans in the arts, for example, who are incredibly ingenious.

The problem is that we mistake the importance of technical ability, and vastly underestimate the importance of entrepreneurial ability. Our schools are organized to produce technicians in all fields, and from age 16 a student must narrow down their course of formal study (for life in most cases) to four subject areas and General Paper.

The truth is that educating another lawyer, doctor or accountant is unlikely to contribute much to our GDP. Narrow technical abilities are admirable, but nowhere near as vital to countries in which the large mass of people cannot afford to use them.

What most developing countries need are not more professionals with masters degrees in contract law, but more entrepreneurs who are willing to hire ever increasing numbers of ordinary people.

In the Caribbean, we have developed First World values that have no basis. In other words, we cannot afford to produce more and more sophisticated cardiologists, when the people who need them are selling icy-mints and steering-wheel covers on the corner.

What would it be like if we as a society were to value entrepreneurs, and determined to make their way easy?

What if that ingredient were to be taught in schools as a subject? Included in every profession as a subject to be studied? There could be subjects in medical school, engineering school and law school on starting and running successful small and mid-sized companies.

What would it be like to know that in the bigger picture, the company that creates opportunities for others enables all professions to thrive, all families to eat, and all children to be educated?

As an engineer who started his own company with little or no formal training in entrepreneurship, I made far too many mistakes that could have been avoided. When I graduated, I had no idea I would end up owning my own company, and it was not until my father started his that I could imagine that it was something I ever wanted to do. That was 14 years ago.